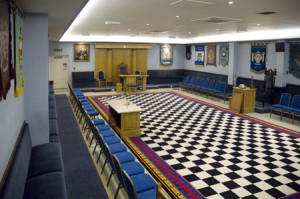 We meet formally as Freemasons four times a year at the Masonic Centre in Hillingdon, Near Uxbridge, Middlesex. The Centre is within easy reach of Hillingdon Tube Station and the A40 and the M25. So our catchment area is far and wide, with easy access from West London, Ealing, Northolt, Harrow, Ruislip, Denham, Rickmansworth, Chorleywood, Watford, Heathrow, Southall, Acton, Greenford, Perivale, Hayes, Bushey, Ickenham.

Ansgar Lodge meets on the second Tuesday of October (Installation) and the first Tuesday of December, February and April.

At the October meeting the newly elected Master is “installed,” and he appoints and invests his officers for the year. We usually perform Degree Ceremonies from the Universal Ritual (quite an uncommon variation on the ritual, and something that the Lodge is very proud of) at the other three meetings, and occasionally a presentation is given on some interesting facet of Freemasonry. The meeting is followed by a three or four course meal in one of the Centre’s dining halls.

Additionally the Ansgar Lodge of Instruction meets on the three Tuesday evenings preceding each regular meeting. Sometimes we even go to the bar for a quick drink afterwards.

On the social side the Lodge organises a “Ladies Festival” once a year, which is usually a formal dinner-dance. The Lodge sometimes runs a stall at the Royal Masonic School For Girls, Grand Family Fete once a year. Other events are organised on an occasional basis.

Manage Cookie Consent
To provide the best experiences, we use technologies like cookies to store and/or access device information. Consenting to these technologies will allow us to process data such as browsing behaviour or unique IDs on this site. Not consenting or withdrawing consent, may adversely affect certain features and functions.
Manage options Manage services Manage vendors Read more about these purposes
View preferences
{title} {title} {title}